What is wool? Wool is a natural textile fiber that is obtained from sheep and other animals that have woolly coats. It includes cashmere and mohair from goats, angora from rabbits and also qiviut from muskoxen.

The chemical structure of wool consists of protein and lipids so it is classified as a protein fiber, as opposed to many other natural fibers (like cotton and linen) that are cellulose fibers. 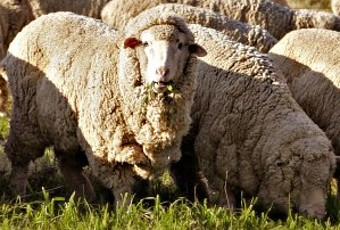 The wool that is commonly used in the textile industry comes from sheep. Sheep will be grown to produce meat, milk or wool (fiber).

There are about a hundred species of sheep that will produce fleece but Merino is the breed that is widely raised for wool production. To understand what is wool, we need to look at the production of wool.

To produce wool, the first step would be to raise sheep and then shear them.

The fleece is classed according to the quality of the fleece and this is done by a wool classer, who groups wools of similar gradings together. Lambswool is the very first shearing from a lamb at around seven months old and produces very soft fine fibers.

A micron (micrometer) is the measurement used for the diameter of wool fiber. The diameter of the fiber is the most important characteristic in determining the value of the wool. The finer the wool fibers, the lower the micron value and therefor the higher the cost. Before Merino fleece wool is auctioned in Australia, it is measured for micron, yield, staple length and staple strength and sometimes also for colour.

Two main manufacturing methods or systems are used to produce yarns and fabrics: the worsted system or the woollen system.

Wool that has come straight off a sheep is known as “greasy wool” or “wool in the grease”.The greasy wool needs to be cleaned before it can be used for commercial purposes. The process of cleaning the greasy wool is called scouring. Greasy wool contains a high level of valuable lanolin, as well as the dead skin and sweat residue from the sheep. Usually it also contains pesticides and vegetable matter from the animal’s environment.

Many impurities are found in raw wool including dirt, sand, vegetable matter and a mixture of sweat, grease, urine stains and dung locks.
Many types of wool with different strengths, thicknesses, staple length and impurities will come from a sheep. The raw greasy wool is processed into “top”. “Worsted top” requires straight, parallel and strong fibers.

Scouring may be a simple process of washing it in warm water or a complicated industrial process using detergent and alkali in specialized equipment. Industrial scouring involves the greasy wool being put in a series of washing bowls, normally 6 to 8 bowls. The first 2 or 3 bowls will have warm water and detergent and sometimes also an alkali. During these washes most water-soluble substances are removed. Then follows 3 to 5 bowls of rinsing. 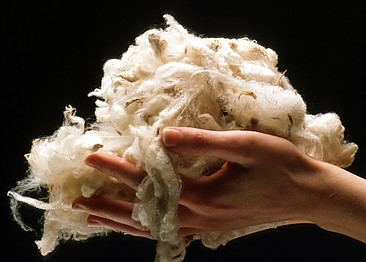 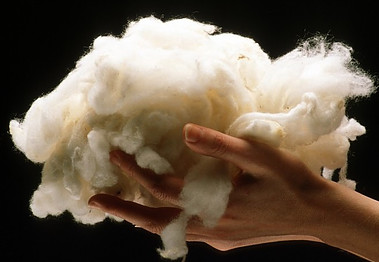 The vegetable matter in commercial wool is often removed by chemical carbonization, which is the conversion of organic matter into carbon. In hand produced or less-processed wools the vegetable matter may be removed by hand and through using gentler detergents, some lanolin will be left in the wool. Lanolin removed from wool is widely used in the cosmetic industry for products such as hand creams.

The scoured loose wool then goes into a continuous drier and afterwards is then mechanically beaten to remove insoluble substances like sand and dust. At the end of scouring almost all the different contaminants should have been removed from the greasy wool. Next the wool is pneumatically transported into a closed room known as a bin, where it is blended and left to condition until the moisture content reaches equilibrium.

The next stage of manufacturing is known as top-making.

Top-making is unique to the worsted method of manufacturing and is not used in the woollen system. There are three mains steps involved namely carding, gilling and combing, which are all methods that prepare the fiber for spinning. 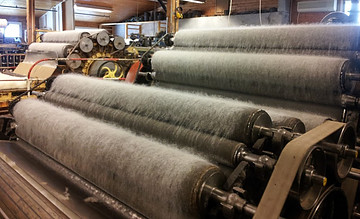 1. Carding is a mechanical process whereby fibers are separated and knots and tangles are removed from the fibers. A carding machine consist of sets of drum rollers with tiny teeth and it aligns the fibers to be parallel for spinning. Short fibers, called noils, are also removed during carding.

Carding will remove as much as possible of any remaining contaminants, forming a homogeneous web of weight per area. This web will then be formed into a continuous length of fiber known as a card sliver. Carding can also be done by hand with square or rectangular paddles. Hand spinners will sometimes card their own wool and this can be done with “greasy wool”, depending on the spinner’s preferences.

2. Gilling is the process of attenuating worsted fibers and making them parallel. Gilling ensures further alignments of the fibers and further blending of wool. It also ensures that hook shaped fibers are in the best direction and it evens out the linear weight of the carded sliver. A gilling machine have two sets of rotating rollers with a bed of moving pinned combs between the front and back roller. The slivers are drawn through the bed of moving combs by the rollers, resulting a single sliver coming out of the machine. 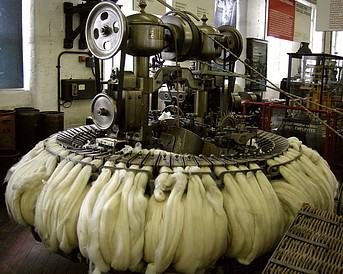 3. Combing Wool is combed only in the worsted method of manufacturing and will be combed twice (known as re-combing) in the production of fine wool yarns. Combing is divided into linear and circular combing and it separates out short fibers by means of a rotating ring or a rectilinear row of steel pins. The long fibers that are left are called tops and the short fibers are called noils. The noils are removed and also small clusters of fibers, called neps. Combing will also remove any traces of seeds or burs that might be left. A combing machine have a series of fine combs through which the fibers are brushed, resulting in a combed sliver.

The combed sliver undergoes a series of gilling again and then drawing, by passing it through a roving machine.

The final stages of wool production is spinning and finally weaving if it is being used for textiles. 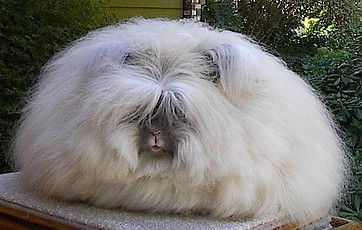 Angora rabbits can produce coats in different colours from white through tan, gray, brown and black. Good quality angora fiber is around 12–16 micrometres in diameter, and can cost as much as $10–16 per ounce (35 to 50 cents/gram). The animal itself needs to be groomed frequently as the hair felts or matts very easily.

The cost of 100% angora fiber is high so it is often used as accents. They have the most warmth and fluffiness, but can easily felt through abrasion and humidity and can be excessively warm in a finished garment.

Angora fiber is not naturally elastic so the fiber is often blended with wool to give the yarn elasticity. The wool/angora blend decreases the softness and halo, as well as the price of the finished object. Commercial knitting yarns is typically produced using 30–50% angora, in order to produce some halo, warmth, and softness without the side effects of excessive felting.

Wool is used in clothing, blankets, carpets, upholstery, horserugs and saddlebags and also for insulation.

Organic wool is becoming more and more popular but it is still limited in supply. Much of it comes from New Zealand and Australia.

If you have any comments or question, please leave them below and I’ll get back to you.

18 thoughts on “What is wool? The natural fiber to keep us warm”