To get a better understanding of what is fabric dye, we need to look at the different kinds of dyes, which are either natural or synthetic (artificial).

Natural fabric dyes can be divided into 3: animal, plant or mineral dyes.

Natural fabric dyes are derived from plants, animals and invertebrates or minerals. The sources of natural dyes are roots, nuts, insects, flowers, berries, bark, leaves, wood and other biological sources such as fungi and linchens.

The majority of natural dyes that are used in the fashion industry today, are vegetable dyes that are derived from plant sources.

Without getting too technical about Latin names and the history of each, the natural fabric dyes that are mostly used in the fashion and textile industry are:

Animal dyes are extracted from animal or invertebrate bodies.

Plant or vegetable based dyes are extracted from the roots, stems, leaves, flowers and fruits of plants. Plant based dyes like indigo, saffron, wood and madder were commercially produced and became important in the trade between Europe and Asia.

Mineral dyes are not an invention and are often used in the production of carpets. The mineral dyes that are mostly used are:

Synthetic or artificial dyes are manmade and are mainly derived from petro-chemicals through the chemical processing of coal tar (or oil processing). 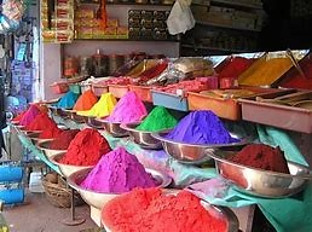 Synthetic dyes were started in the middle of the 19th century and it led to the decline in the production of natural dyes.

Mauve or mauveine was the first synthetic dye that was discovered by William Perkin in 1856. It was by pure chance that he discovered it and it quickly led to the discovery of fuchsine, safranine and induline. Many thousands of synthetic dyes are now available.

Synthetic fabric dye can easily be produced in very large quantities and are suitable for the dyeing of synthetic fibers and fabrics. Some chemicals found in synthetic dyes include mercury, lead, copper, benzene, chromium, toluene and sodium chloride. All these can be toxic when an individual is exposed to large doses.

Natural vs Synthetic Dyes – what are the differences? 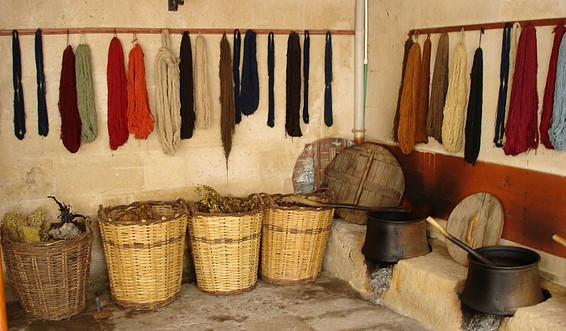 Personally I think natural fabric dyes are the best as they are less harmful to the environment. Natural fabric dye give the yarn a natural and high lustre which is difficult to achieve with synthetic dyes. I hope this has given you a better understanding of what is fabric dye and the options that are available.

The process of dyeing.

The history of dyeing goes back to the Neolithic period and in China dyeing with plants, roots and insects have been traced back more than five thousand years. 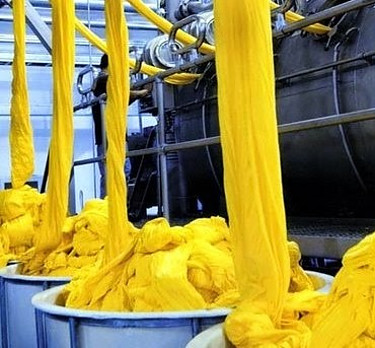 The essential process of dyeing has changed very little over the centuries. Typically, the dye is put into a pot of water and brought up to boiling point. The fiber or yarn that needs to be dyed, is then added to the pot and stirred until the color has been absorbed by the textile. This varies in time from a day to sometimes weeks.

Different processes are used for fiber, yarn and fabric and various treatments are required before and after the dyeing process, but these will be discussed in a separate article.

After the dye has been applied in the water solution, a mordant might be required to fix the fabric dye to the fiber and improve the color fastness of the fabric. Although dyeing can take place before spinning the natural wool or other fibers, many fabrics and textiles are dyed after weaving.

One needs to “bind” the color to the fibers or textiles. Mordants such as aluminium, copper, chrome and iron are the substances that are used to “fix” the dye to the fibers or fabrics. But the mordant used to bind the color might be toxic.

In the early days a variety of natural products were used like, salt, tannin from oak galls, natural alum, ammonia from stale urine or vinegar. Nowadays chemicals, known as mordants, are used to bind the fabric dye to the fabric. Many mordants and also some dyes themselves, produce very strong odors and need to be separated from other textile processes.

The type of mordant used can change the colour of the dye solution and also affect the shade of the final product.

Many years ago when I was weaving, I experimented with dying my own wool. 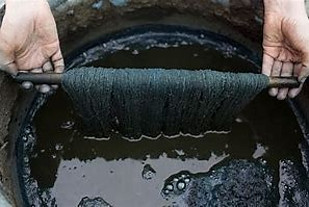 The first batch I tried was using onion skins. I boiled the onion skins in water and then added the natural colored 100% merino wool. It yielded a yellowish hue, bordering on the mustard, much to my surprise. The next batch of course looked different as the intensity of the onion skins and the quantity of water would have been different.

The next color I tried was using carrot peelings, expecting bright orange wool. Once again the color was far more subdued than I had expected. But it was very exciting boiling up the concoction and waiting for the surprise of the color.

To “lock” in the color I then added vinegar to the water and the wool.

What is the current trend?

Since the beginning of the 21st century, there has been a resurgence in the demand for natural fabric dye to be used in the fashion industry. Western consumers have become more and more concerned about the environmental and health impact of synthetic fabric dye in the production of yarns and fabrics. It is leading to a growing market for products that use natural dyes.

More dye manufacturers are focusing on creating dyes that are using environmentally friendly ingredients and minimizing the use of harmful chemicals in their products. So when it comes to what is fabric dye, choose what has the least harmful effect on people, nature and the environment.

Please feel free to leave any comments or questions below and I will get back to you.